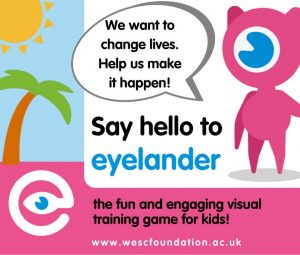 WESC Foundation – The Specialist Centre for Visual Impairment based in Exeter, Devon, is excited to launch a new therapeutic computer game called Eyelander. Eyelander is a browser game designed specifically to help young people with visual field loss caused by Cerebral Visual Impairment (CVI) to use their vision more effectively.

Eyelander was designed by scientists from WESC Foundation and the University of Lincoln who were motivated by the desire to take existing therapies used to rehabilitate adults with visual field loss and make them more engaging for younger parrticipants. The behavioural therapy that Eyelander is based on trains players to move their eyes more efficiently and through regular practice this exercise can improve performance on daily activities that require good vision, such as walking more safely in a crowded environment.

If you have visual field loss, are a parent with a child who has visual field loss, or know anyone who might be interested in taking part in this research project then please visit www.eyelander.co.uk to register and play the game. Eyelander does require a laptop or desktop computer with a modern browser installed to play. For more information please contact Dr Jonathan Waddington, WESC’s Research Scientist, by email at: eyelander@wescfoundation.ac.uk.

Back to Latest News

The size of your game window suggests you're playing on a mobile platform. Unfortunately this game isn't playable on devices with small screens.

Have you tried maximising the size of the window?

You can still access the site and register an account, but the game can only be played on a desktop computer that has a mouse.

An adult aged 18 years or older

Who wants to take part in research while they play Eyelander?

A parent or legal guardian

Of a young person or child who wants to take part in research while they play Eyelander?

But still want to play Eyelander?